At the beginning of the game, shufﬂe the deck of Night Terrors and deal ﬁve cards to each player. Players keep these cards in their hand, secret from their opponents. Place the deck in the middle of the table face down, and leave a space next to it for the discard pile. If you run out of cards in the deck during the game, reshufﬂe the discard pile and place it face down, creating a new draw deck.

Players take turns in clockwise order, beginning with the last person who had a nightmare. The game continues until one of the players completes ﬁve Creatures—this player immediately becomes the winner. If you like, you can play to a higher number of Creatures—six or even seven, for example—but this will require a very large table, especially if you have many players participating.

During your turn, you perform two actions, after which the next person to your left takes their turn. There are 3 possible actions to choose from. You can perform the same action more than once. 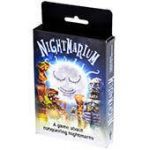